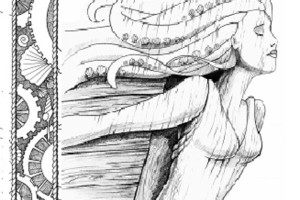 So, a little while ago I was invited to write a story for quite a different sort of anthology, and I took up that challenge. Tales of adventure, featuring a duo in the lead roles, and with a setting or characters from Australia or New Zealand. So how could I turn that down? The result is Tipuna Tapu, a piece of dieselpunk set in a monster-apocalypse Aotearoa.

Tipuna Tapu is one among a couple dozen novella-length stories being published in …And Then – The Great Big Book of Awesome, which is now looking at running to two volumes. Other authors also in the book include some of the biggest names in the Australian fiction scene, such as Alan Baxter, Amanda Pillar, Jason Nahrung, Tansy Rayner Roberts, Jack Dann, and Lucy Sussex, among many more.

Publisher Clan Destine Press is now running a pre-sales campaign to help get this big book of awesome off the ground. If you’d like to see my newest adventure tale take off you can help by supporting the book, for as little as $20AUD for both ebooks, crammed full of rollicking adventure tales, or $50AUD for paperbacks of both books. I’d love it if you could stop by the Indiegogo page and back the project with a pre-order.

To whet your appetite, here’s a taste from the opening of Tipuna Tapu:

“Storm’s coming in,” Maddy said, ramming down the gas pedal in a burst of rancid bioethanol smoke.

“I see it.” Ihaka didn’t need to be told. He tugged his goggles down and grabbed the nailgun trigger grips, checking the air pressure was solid and that the ammunition belt was running free. It didn’t pay to get caught out in a storm without plenty of firepower. He braced his feet in the metal stirrups at the back of the jeep, swivelling the gun on its gimbal. Quickly, he touched fingers to the pounamu at his throat in silent benediction to unseen ancestors, then gripped the twin triggers again. Scanning the sky, he glimpsed a shape, all wing and spiral, twisting through the boiling clouds. “How far to the caves, e hoa?”

“Too far!” Madeline shouted back, her hair whipping about her face as she slammed through another gear, jerking the steering wheel to avoid a skein of fallen fence-posts.

“Not exactly Highway Sixty-Six out here,” she snapped in her thick English brogue, wrestling the wheel as the front tyre slid in a slurry of mud. The jeep slewed, gripped, hurtled forward. The engine snarled as she revved it hard, a plume of smoke spilling from the tailpipe. Ihaka tried to hold the gun steady, sighting down the barrel for something—anything—he could draw a bead on. The storm writhed closer, rushing across the darkening sky with all hell’s fury. But the way the jeep was jinking and jiving across the tumble-down paddocks strewn with rusted farming equipment and collapsed fencing, he could barely keep a bead on the horizon, much less anything darting through the clouds above.

Lightning flared, followed by rolling cracks of thunder. Something swooped across the cloudbank, banking and descending. Ihaka swung the nailgun, lining it up, judging speeds, distances, range. Black wings folded into razor sickles carved a line across the grey, before the creature twisted off and vanished back inside the cloudbank. White light burst sudden, brilliant, as it swept away. The heavens shook.

“Tell me it’s not right on top of us already!” Madeline yelled.

“OK,” Ihaka shouted, rain streaking his goggles. “It’s not on top of us already.”

Maddy threw the jeep into a hard right, then a left, and Ihaka glimpsed the skeleton of a tractor whip by them, almost obscured by the tall grass. Probably a good thing to go around, and not through

“You just keep your eyes on the road. Leave the taniwha to me.”

Movement then, a shadow against the black, a glimmer of fire within, spiralling towards them, twin scythes sweeping toward the kill. Ihaka wove the cannon, matching the beast’s descent, counting off the distance between them as it closed. He could make out the open jaws, the spark within, the bright glints of its onyx eyes. A lesser man would’ve emptied the ammo belt at the mere sight of it, but Ihaka had lived through such nightmare more than once, and he had done so through a combination of a steady hand, iron nerves, and a skilled and cocky driver at his back. He let the monster close in. Most folk wouldn’t believe it if you said you have to wait until you see the white of their eyes before you shoot. Most had never been that close, close enough to see the white pinpricks at the centre of those pools of black.

Ihaka had. Lonely stars in an empty night sky, those eyes. His fingers settled on the triggers. “Steady if you can,” he said, his voice firm but suddenly calm. “Taniwha incoming. One click.” 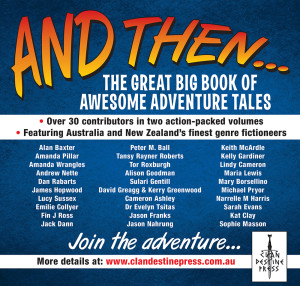 If you want more, head on over and support …And Then – The Great Big Book of Awesome.

This entry was posted in Books, Short Fiction. Bookmark the permalink.