Come is the Wolf in her Wounding 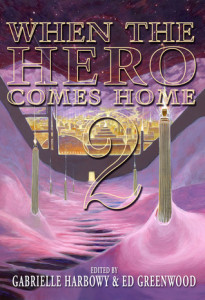 A barbarian queen stumbles from the portal, covered in blood both red and black. Her wolves flow past her, and the scattered remains of her army, her nation, regard her with awe and fear. What has she become, in that place beyond the veil?

Come is the Wolf in her Wounding is a dark fantasy piece, which questions the power of family, the chains of love, the bloody bonds of loyalty. Included as a bonus story in the ebook version of When the Hero Comes Home Vol 2, from Dragon Moon Press.

If you like what you read here, you can purchase the ebook by clicking on either the kindle or epub widgets below. A portion of each sale comes back to me, and if you share the link, then you could also earn a slice of the cover price in return. All very innovative stuff.

Come is the dusk, in her weeping.

Gone is the wolf, to her roaming.

Come is the wind, in her howling.

Gone is the moon, to her sleeping.

Furgen found the Wolflord there beyond the gate, her head and shoulders bent over a savaged corpse. The wolves stalked about her like guardians, she of the darkest eyes sitting at the Wolflord’s shoulder, her muzzle black with blood.

“How did you find me?” Angor asked, her voice a rasp.

Broken teeth loomed out of Furgen’s face like so many gravestones in a winter’s night, his skull as bald and shining as a summer moon. He gestured towards the pillar of daylight that would take them back to the mountainside, back to the world beyond. “Those who remain hail you as a hero.” Answering the Wolflord’s questions had never been the warlock’s raison d’etre.

“And those who fell?”

Furgen made no reply. Nothing remained to be said. In truth, there were no heroes on days such as this, when snow burned in the blue sky, when nations crumbled, and only loyalty and tragedy and grief remained. Instead, he regarded the woman who lay dead at the Wolflord’s knees, her cold eyes staring blindly skyward, a vague smile creasing her scarlet-streaked lips. He wondered how it was that a barbarian queen whom he had seen perish upon the field and whose body he had watched the funeral pyre consume many long years before might come to be here, beyond the veil that divided the quick from the dead, her cheeks bright with the flush of her final breath.

But such were not questions worth lengthy consideration. There was already too much that did not bear explaining in his own world to start asking questions of others.

The ground heaved, driving Angor to her feet. Luuger growled, and the wolf pack howled with her, erupting into a whirling frenzy of muzzle and tail that circled around warlord and warlock, a canine tornado.

“We are done with this place,” said the Wolflord, and with this she turned away from the boiling clouds. She did not spare the body a final glance, despite the clean lines that cut streaks in the blood and filth coating her cheeks. Woman, man and the wolves that flowed about them left the body where it lay and stepped through Furgen’s rippling gate, back into the world they had always called home. Behind them, the door closed on that other world, that land of the dead, that place of shadow and memories unwanted, knowledge better left lost in the darkness than ever brought to light.

Gone is the dusk, to her sleeping.

Come is the wolf, in her howling.

Gone is the wind, to her roaming.

Come is the moon, in her weeping.

2 Responses to Come is the Wolf in her Wounding