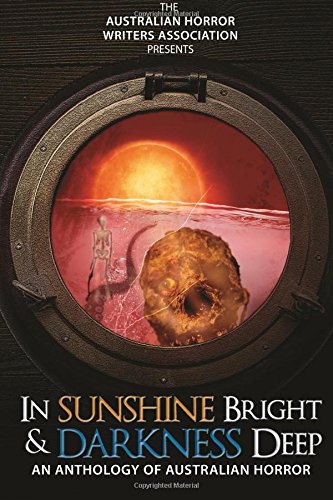 Two brothers go to war. Only one returns, and he brings something back with him, something cold, something hungry.

Elffingern appears in the inaugural showcase anthology produced by the Australian Horror Writers’ Association, In Sunshine Bright and Darkness Deep. Like Floodgate, it is also a story of New Zealanders in the Great War, and so it is very important to me to see both these stories published this year, the centenary of the battle at Gallipolli which has left such an abiding scar on the collective consciousness of our young country.

Smoke and blood. Mud and steel. The thunder of artillery, the chatter of machine guns, the grind of tanks.

Two brothers, pressed hard against the wet trench wall, panting. Rifles tight to their chests, dirt rattling on their helmets as they wait for a lull, wait for the order to throw themselves into the fury of the German machine gun nests.

One more breath, one breath too long. A shell lands with a roar a score of yards distant.

Two brothers, lifted and thrown sideways like little more than sacks of coal. The hollow ringing in the ears, the dull echo of screams, the hot burn of shrapnel. One brother, mouth agape but no sound coming out, staring at the burnt bleeding stump of his elbow, his hand and forearm twitching in the mud several feet away. The other, staring through the hole in his left hand where his smallest finger had been, pulsing blood through burnt flesh. Too dazed, too numb for pain. He looks at his brother, not dead yet, but lying, gasping, bleeding. He ought to cry out for help, but here in the blinding madness of the trenches, of other men’s war, so very far from home, there is no-one to hear.

The crunch of boots in mud and debris, someone calmly approaching. The soldier looks up, gazes upon the figure standing head and shoulders above the top of the trench, and waits for the fool’s head to explode in a burst of hot lead. The figure’s coat is long and ragged, too smeared in mud and ash to identify insignia or rank. His battered helmet serves no better to identify him. The stranger crouches in the mud beside the dying brother, who gibbers like a lost babe. A bloody knife appears from inside his coat.

James watches as the apparition grabs his brother’s remaining hand, and screams as the knife comes down.

In Sunshine Bright and Darkness Deep can be found at Amazon and elsewhere.