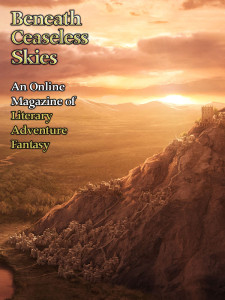 Read the story on the Beneath Ceaseless Skies website, or get the ebook for you reading device of choice.

UPDATE: Reviewed by Lois Tilton in Locus Magazine – “Good old-fashioned dark fantasy … where a lot of the evil is human, but not all of it. As for the character, though a simple fellow, Rosco makes some pretty wise judgments in a tough situation.”

Also available in the anthology Ceaseless West, featuring all the best Weird West stories to have appeared on BCS. Available from Weightless Books and other places.

No way, Rosco knew, that Sheriff Dylan would let a killer walk the town loose for no good reason. But Sheriff Dylan weren’t around when the stranger rode up with two bodies slung over his saddle all shot to pieces, just Rosco; Rosco, with his shiny new deputy’s badge and his Pappy’s six-shooter that his Momma had given him after Pappy hadn’t come back from down the Mile, all that was left just his gun and his boots and what little pieces the sheriff could find.

Rosco guessed he’d have to handle the situation, what with the sheriff being away down the Mile and all. He stepped out into the main road that ran down the middle of Gutshank, population one-hundred-fifty-three, and rested a hand on the pearly handle of his revolver. Tried to look mean, like his Pappy would’ve done.

The man’s cold eyes settled on him from a-ways off. “Yup,” he growled around a mouthful of tobacco, “I got me some wizard trouble.”

Rosco swallowed hard. Anything to do with wizards was trouble of the worst sort.

The man dragged at one of the corpses, letting it flop over. “Dead wizard trouble. I’m here for the bounty.”

“Bounty?” Rosco was just a deputy, after all. He didn’t know nothing about bounties. But he knew well enough to be shit-scared of anything involving wizards.

“The federal bounty. Don’t be messing about, Deputy. I killed me some wizards, and I come for my coin.”

The stranger stared at him for a long minute, chewing slowly. “Down the Mile, you say.”

“Then I guess I’ll go down the Mile and find him. Got a cell? I want my dead ‘uns locked up.”

Rosco chuckled, shuddered. Last thing he wanted or needed was a couple dead wizards in his cells. “You’re scared someone might steal ‘em?”

The stranger’s salt-pepper beard crinkled into a ghost of a smile. “More worried they might walk away on their own. You don’t want dead wizards wandering around your pretty little town now, do you, Deputy?”

Rosco’s stomach tightened. “Sure don’t. But I don’t much see as how a jail cell’s going to hold ‘em back, neither.”

“Well, I guess we’ll just have to take ‘em along, when you and me head down the Mile to find your sheriff and get me my bounty.”

Rosco’s breath hitched in his throat. “Me and you? Sorry mister, but I can’t leave my post. Sheriff’s orders. I’m here to watch for trouble, see.”

The man leaned forward and hawked a gob of black spit into the sand at Rosco’s feet. “You see any trouble, Deputy?”

Rosco saw it all right. And he didn’t want nothing to do with it. “You just keep on riding, mister. You head on down the Mile. You go find the sheriff.”

“So now you and your badge are driving me out of town, me with my rightful claim to the president’s good gold?”

“Now don’t be talking like that, mister. We’re just a small town, and we ain’t got no cells fit for wizards. If you want the sheriff you’ll have to go find him, and take your wizards with you. They’re your concern, and you won’t be making ‘em mine.”

Rosco wondered if Pappy would’ve been proud to hear him talking so tough to this dangerous, mean-faced varmint. The stranger stared, long and hard, and truth was it took all the iron in Rosco’s blood to keep his chin up and his eyes straight as that gaze bore him down. Yep, Pappy’d’ve been proud.