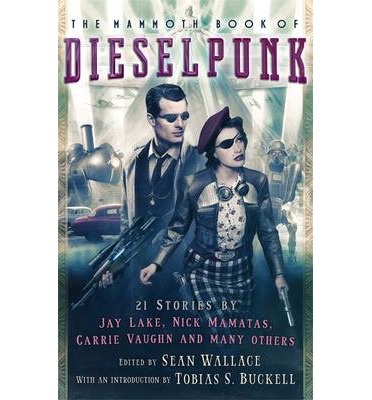 Floodgate is a little bit of Kiwi Dieselpunk, appearing alongside authors such as Jay Lake, Carrie Vaughn, and Genevieve Valentine, in The Mammoth Book of Dieselpunk, edited by Sean Wallace.

Floodgate is a finalist for the 2016 Sir Julius Vogel Awards for Best Short Story.

It’s available in the usual formats from the usual places.

Rubber screeched and wind roared as Flight Lieutenant Flinder hoisted the airbrakes to full. The Sopwith Wildebeest’s Vickers engine howled, a squealing descant of gasoline and hot metal, momentum battling the will of the pilot as she choked back the throttle and fought to keep the biplane in a straight line. The aircraft hurtled down the impromptu desert runway, bouncing as the wheels shredded dust and loose stones. Flinder grappled with the jerking stick, swallowing her rising panic. At any moment a chance collision with a stone could tip her crippled craft, a wingtip grabbing the earth and sending the whole plane cartwheeling in a bright blossom of fire, torn metal and splintered timber. Then the tailwheel touched dirt, inertia and gravity asserted control, and the plane slowed.

Flinder breathed deep as the Wildebeest decelerated to taxiing pace, the engine coughing and missing. She nudged the biplane around in a half circle, until she was facing back the way she’d come, looking through the blur of the propeller at the trail of smoke that marked her descent. Small dark shapes looped and arced against the clear sky amidst crisscrossing streaks of black. Cannon-fire flashed bright like summer lightning. Flinder breathed the smell of motor oil, hot metal and woodsmoke. Her eyes settled briefly on the blood spattering the glass, before she realized that one of those black dots was coming around, bearing this way. Probably the Hun blighter that had peppered her plane and co-pilot full of lead. She twisted to look over her shoulder, confirming what she already knew: Croft hung slumped in his straps, his leathers soaked in blood. Maybe, if she could haul his dead weight from the cockpit and get to the cannon controls in time, she could shoot down the incoming Fliegertruppe. But she would be open to the enemy’s machineguns, and the same burst of fire that had ripped through the plane might’ve shredded the wire controls that swiveled and fired the rear cannon armament.

Either way, she’d be a sitting duck. Her and the photographs that Croft had died for; photographs that filled her with dread every time she thought of what she had seen in the lake at Tunis. More urgently, the smoke was growing thicker, and she could smell fuel. It might only be minutes before fuel met flames and fire engulfed the Wildebeest.

“Sorry, mate,” Flinder said, tugging her tinted goggles over her eyes and wishing there were more words. Her skill as a pilot had served her well, up until now. This time, it hadn’t served Croft a damn.