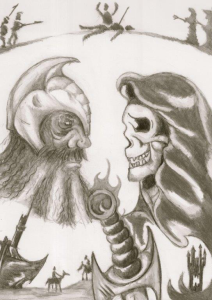 An empire fallen to rust. A father’s grief. The long memory of power, and love, and revenge.

Published in Aurealis Magazine issue #62, Remnants is a dark fantasy tale of loss and desperation, and of the value of promises, both spoken and unspoken.

You can get a copy from Smashwords, where you can also read the opening pages.

“A hard wind scoured the warparty, causing the horses to snort and shift in the sand, their barding softly clinking. Across the rasping valley, ancient rigging and tattered sails creaked and snapped against the desert sky. One hundred galleys quietly rotting for a dozen generations in a place where no ship should ever be. But this place had not always been a desert.
‘So, Ironbrand? What do you think now of the legends?’
Ironbrand gripped his pommel and regarded the shredded hulks, not turning to look at the one who addressed him. Why waste the effort of turning his head, when he would not see the man’s face? ‘They turned a sea into a desert to maroon an invasion fleet. Yes, it’s impressive, but the Irridian Empire still fell.’ Ironbrand uncorked a waterskin and suckled. ‘More importantly, what do you make of it, necromancer?’
The necromancer shifted in his saddle, though with discomfort or contempt, Ironbrand could not tell. A heavy cowl concealed the man’s head, his features lost in shadow black as sin. Yellowing bandages swaddled his hands, as if some dark oath forbade him from knowing the feel of wind on his skin. His heavy scarlet robes were completely unsuited to the desert clime yet he, of the entire warparty, seemed the least uncomfortable beneath the hammer of the sun.
‘After the elemental sorcerers broke the Emerald Coast stranding the Karpithiaan Fleet, the Fireforge legions descended on them with black iron and blacker fire. Three thousand soldiers, sailors and magi died in this place on that day.’
‘Spare me the melodrama, Callas; I know the history. Do the dead walk these blasted decks or not?’
‘You were not always so impatient.’
‘Now is not the time to question me.’
The necromancer sighed, a hollow sound. ‘I can arrange the incantations, though perchance it would be faster to send runners amongst the wreckage to see if they return, and if they do, in how many pieces?’
‘You were not always so callous,’ growled the Emperor.
‘Yet here we are. What is your decision?’
Ironbrand ground his teeth. ‘Prepare the spells.’ He fought the urge to watch the necromancer’s back as he pulled his horse away, and thought of the son he had once known.”