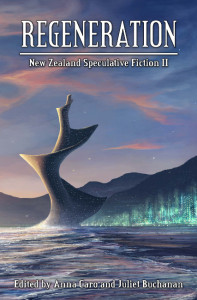 A quiet story of the horror that lurks in places we least expect, this story is my contribution to Random Static’s Regeneration – New Zealand Speculative Fiction II. Available in paperback or ebook.

Mother’s Milk has also been recently reprinted in Te Korero Ahi Ka, an anthology of fiction by members of SpecFicNZ. It can be found here.

Back into the rain he went, trudging through the mud as he whistled for the dogs, water sluicing off the cold sharp steel he carried. Mud, rain, and steel, just like the old days. The world was full of monsters, he now realised, though some of them wore the faces of men, while others instead buried their evil, burrowing their roots deep into the earth. Charles remembered digging, digging endlessly, amidst the crack of artillery and the rake of machine-gun fire, listening as other men’s evil savaged the earth, the earth which greedily lapped up the blood of good men, innocent men, brave men. No amount of digging would ever cleanse all that blood from the soil, nor strip that evil from the dark places where it lay hidden. All a man like Lieutenant Charles Reardon could do was cut the monsters down where he found them. What he wouldn’t give right now for a grenade, or a stick of dynamite.

A solitary figure, he stumped up the ridge towards the tortured shape of Old Man Pine. He was halfway there before he realised that the dogs, who were normally always at his heel, weren’t beside him. He paused, turned, looked down through the rain at the house where it sat perched on the hillside like the crows he had watched from the trenches – its black windows like the black eyes of those black birds waiting to set upon the leavings of battle with beak and talon. The house seemed to look back at him, old and tired and hungry. Charles repressed a shiver, refused to think the thought that arose unbidden: Caught between the gaze of two monsters.

Charles whistled for the dogs, but against the soughing timbre of the ancient branches, his call was a thin, reedy sound, drowned out by the pelt of wind and lashing rain. “Damn dogs,” he muttered and turned away, carrying on up the hill, more alone than before and smaller by the step as the tree grew ever larger, more twisted, more impossibly watching the closer he got. 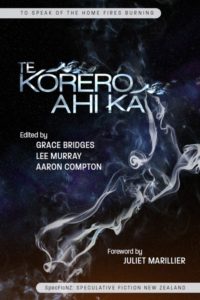 Casting a glance over the edge of the ridge, down into the bottom paddock, he saw the ancient stone footprint of the building that had once stood below; what remained to be seen of it, at least. He saw the fireplace he liked to rest his weary bones on. Maybe it had been the first homestead some intrepid colonial had dared to build on this land, back when the hills had been dark with ancient forests and alive with birds, whose calls now existed only in history and memory. He wondered if the homesteader had lived alone, or if he had raised a family on those draughty stones. Wondered how it must have felt to watch it burn to the ground, or be swept away by a flood, or whatever might have happened to so completely strip it from the face of the earth.

Charles had watched things die, seen things burn. But there was a strange sadness in knowing that this fragment of the pioneering spirit had met such a sad, sorry end. Life went on, he knew. He had seen too many horrors and yet carried on, working and eating and sleeping and shitting, one day to the next, to be able to believe anything else. One house is taken away, those who remain build another, to bury their grief and hide from their dead.

One Response to Mother’s Milk