Where the River Shines 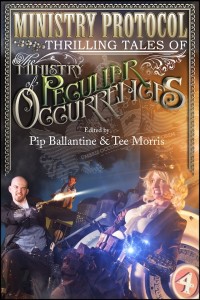 Set in the Ministry of Peculiar Occurrences universe, and included in the anthology Ministry Protocol, Where the River Shines is a further adventure of Lachlan King and Barry Ferguson, characters first introduced to the world by Grant Stone in A Ruby in Rain, and whose story continued in my tale All That Glitters.

In this story, which falls between Ruby and Glitters, our intrepid investigators trail the thief of a rare and sacred relic of Maoridom into the mists of the Tarawera ranges, and find that the line between this world and the beyond is not as firm as they might have thought.

You can find more details here.

He listened to Barry, clanging and whistling away in the mud, a colonial farmboy as happy as a pig in muck. Lachlan could think of nowhere worse to be.

Other than his father’s house, he groused silently. But how long before the old man was no longer around?

Unconsciously, he patted his breast pocket. He had read the letter from London so many times he knew every word by heart, yet still he wondered if it could be real. So the old man’s sickness had finally caught up with him, and he probably wouldn’t last out the London winter. Meanwhile, the Ministry had a position free for Lachlan King in the office when he was ready to return. England, her cool rains in the summer and the comfort of soft snows blanketing the hedgerows in winter. How he missed her white cliffs, her lilting songs. England, a world away, where he belonged.

Nevertheless, it was somewhat disturbing to have people in high places keen on your every dark blasted secret. If the Ministry knew of the schism within the King family, what else did they know? Maybe, he thought ruefully, it’s not that I belong in England. Maybe it’s that I belong to England, or to her eyes and ears, at the very least.

A sudden rapping on the hansom startled Lachlan, and he cranked open the hatch. “All done, Ferguson?”

Dark indistinct figures were emerging from the punga trees, weapons of carved wood and stone held low. “Oh,” Lachlan said. “I see.” He wrenched the lever.

“There’s a good chap,” Barry quipped as he hauled himself up and began tugging on handles and dials.

Metal slid and slammed around them as air lines hissed. The hansom walls shifted, opening slits wide enough for a pistol, while a set of gears on the back of the hansom cranked and a telescopic handle-set and eyepiece dropped in front of Lachlan. Polished brass grips and guards fitted smoothly into his palms, his fingertips resting lightly on triggers. He peered into the periscope as his chair craned up, allowing him to swing the entire contraption and look, as it were, down the barrels of the twin machine-cannons now bristling from the top of their battle-tractor.

However, he was not here to start a war. There was plenty of that going on already. He was a gentleman, and would not fire the first shot. He would not use the Empire’s hot lead to cut down men armed only with sticks and stones unless he had absolutely no other choice. His family had been knights, not so very long ago. Lachlan King knew a thing or two about honour. He swung left and right, searching. Bodies slipped between the trees, coming ever closer.

Barry’s words were followed by the sudden heavy squelching of his boots slurping through mud.

“Ferguson? Get back in the tractor, lad! They’ll tear you to shreds!”

Lachlan swung the cannon mechanism in wild arcs, trying to a get a view of the track, but the machine did not swing that low. It would be folly to think he could wait for the enemy to come to him. By the time they reached the tractor, the guns wouldn’t be able to turn to face them.

Then he saw Barry. Like a farmboy who has never seen war, the lad was trudging out through the mud towards the enemy, narry a weapon upon his person, waving his hands over his head, and shouting.

“Ferguson?” Lachlan muttered. “What the blazes are you doing?”

This became clear moment later, as Ngai Tohai warriors flowed from the trees and pushed the boy to the ground.

2 Responses to Where the River Shines