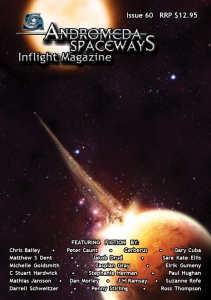 Set in an alternate First World War, Dada is a dieselpunk punk story of a giant robot, and his love for his son. It is the first published work by the writing band Cerberus, being the combined talents of myself, Matthew Sanborn Smith and Grant Stone.

You can find it in Andromeda Spaceways Inflight Magazine, Issue #60, which is available in print, epub, mobi, and PDF.

“The machine limped on over blackened rubble, rattling broken glass from window panes as he passed. The diesels in his chest growled with driving pistons, exhaust funnels pumping smoky wraiths into the sky. His bad leg weakened with each guttering step. Distantly UT-P9 could hear the artillery thump, the machine-gun chatter, the drone of engines. He could not pause. The boy might not have much time.

Just days ago, Ms Kavanagh, behind angry, wet eyes, had told him that a local vicar had written in the paper that this nightmare war, now six years in, had broken the mind of God and allowed aberrations like the boy into the world. UT-P9 had asked her if God’s mind hadn’t broken first and brought the war.

Warnings pulsed in his cranium. One leg was leaking hydraulic fluid. As the pressure dropped, the machine diverted reserve liquid into the lines. When the reservoirs ran dry, he would have walked his last.

But walk he must. He would not fail the boy. So he walked.

The information UT-P9 gathered through his array of visual and auditory sensors combined with the tubes and valves packed tightly into his cranium allowed him to make rudimentary decisions, factoring in acquired prior knowledge to assist these computations. He had used this modicum of intelligence as a factory utility robot might, determining which way the men who had taken the boy had gone by following the ridged trails their half-tracked vehicles had left through the streets, drifted in ash and dust.

A tank appeared around a tumbled wall of shrapnel-scarred brick in a clatter of grinding tracks, all turrets and scorched armour plating, its ensigns obscured by ash and dust. Heroes, the robot wondered, or villains? He knew about heroes and villains.

“Halt!” the tank’s exterior speaker crackled. Its main cannon swivelled to bear on UT-P9. Smaller guns protruding from sponsons on either side cranked about. The robot knew of guns. He had seen men use them to silence other men. He knew men leaked their precious fluids, and that, like himself, when a man’s fluids ran out of his limbs he might fall and not rise again. If UT-P9 fell, what would become of the boy?

He paused, one huge arm extending, mighty hand splaying across the broken concrete, brittle hunks and white dust cascading away from his fingers. He may have appeared to be a runner catching his breath, were that runner bred of titan stock. He considered the predicament, letting the hydraulics pump. Men with guns had interfered with his task enough for one day.

A man clambered out of the tank sporting tinted goggles, a dark grey officer’s cap, and a uniform which was not British. Rather, it resembled those of the men who had assaulted the compound, they who had kidnapped the boy. A red eagle bled from his chest. From a side holster he drew a blunt silver rod.

The men who had opened fire with their machine-guns on the factory guards and workers had also turned their silver rods on the machines. Under the weapons’ invisible rays UT-P9 had fallen, like the men and women had fallen, his leg twisting, tearing at the worn hydraulic line. His fluids had spilled into the dirt to mingle with the humans’ red fluids.

The machine-gun stuttered, hot rounds sparking off UT-P9’s hull. The robot pivoted on his good leg, twisting the carnage beneath his palm as the tank’s main cannon clanked, a shell slamming into the breach. The robot wrapped metal fingers around the tank’s right sponson, his good leg snapping straight, levering the war machine up and over. It rolled, engine coughing, tracks thrashing empty air. UT-P9 gripped it front and back and lifted, shaking it twice, thrice. The screams from within were brief. Silent fell the gun. Fluid leaked from the hatches, dark red in the smoky afternoon light.”

One Response to Dada