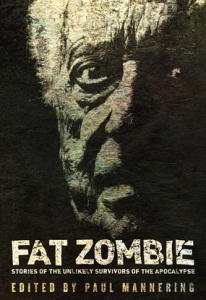 A story of one of the most unlikely survivors of the Zombie Apocalypse, Endgame appears in the anthology Fat Zombie, from Permuted Press, edited by fellow Wellington author Paul Mannering.

“The end of the world isn’t a good time to be the brainiest kid in school. Of particular concern to Billy Collins is that among the throngs of zombies there are apparently a few that can smell top notch grey matter from a distance, even when it’s still locked up inside a skull. And these specimens seem determined to hunt down that top-grade brain and gnaw on it at any cost. Maybe when they were alive they had been the nez or the sommeliers of the world, people for whom having a good nose had been critical, and that talent has remained with them through into undeath. A majority, Billy estimates, had certainly been women. That’s just his luck, to never get any attention from a girl unless it was for his brains. In the old days, girls only talked to him when they needed homework done which they hadn’t finished in time for class, and he would do it too, in the hopes that they might give him a smile afterwards. Not that they did. Now, all they want is to feast on his neural meat. Billy swears that he’s seen zombies, otherwise intent on consuming the poor schmucks in front of them, actually raise their broken noses to the air, sniff, and then abandon their meals in an effort to hunt him down.

Billy, with his 138 IQ. Billy, whose only ever sporting achievement is to have been captain of the school chess team since he was thirteen, and to rank as runner-up in the state chess league, second only to Melinda Parker from over Apple Valley way. Billy, with his straight run of A+ report cards and his scholarship science projects and his complete and utter lack of anything remotely suggestive of a social life.

This is one of those times. Despite having pulled a clean Alekhine defense as his gambit for this acquisitions run, by luring a small band of rugged, heavily armed survivalists into the front entrance of the mall, which had in turn drawn out the clutch of walking dead that he’d spotted shambling around down the back, so that he could sneak in through the side entrance and pillage the sporting goods store, it seems that the aroma of his overwhelming intellect has betrayed him once again.”

Fat Zombie is available in print and ebook format from Amazon and all other major outlets.