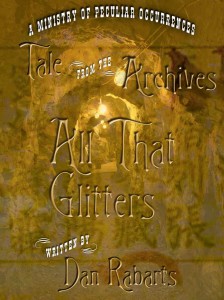 The second of my Kiwi Steampunk stories is my first contribution to Tee Morris and Philippa Ballantine’s Ministry of Peculiar Occurences world, with a tale of mysterious translocations and a missing girl, and father gone mad with grief. You can find the audio (narrated by myself with the voice talents of Grant Stone) over at the MoPO website, or you can pick up the ebook version at Amazon.

“The two agents broke into a run, following the tunnel down, deeper, noting a second, a third, and even more clusters of dynamite along the cavern walls, all spooling them down, ever down, into the shadows.

As they ran, they smelt the smoke. It filled the shaft like a thin haze, and stank of grease. The shaft curved away and then, around the bend, the rails came to an end. Beyond the bumper, where a lone cart clunked softly against the timber with the rhythm of the chaindrive, a vast blackness stretched out. A dozen candles melted into pools of wax along the edges of the shaft, and the string of gaslights came to an end, their light barely penetrating past the cavernous throat.

“Well well,” puffed Lachlan, slowing as he felt the ache of exertion in his bones, “what have we here?” Warily now, they walked past the line marked out by the candles, past the end of the track, where human endeavour ended and natural majesty took over. Piles of rubble and fallen rock revealed the cavern entrance. The ground began to slope steeply away, the water bubbling into a cackling brook as it ran down the shaft.

The thread of fuse wire continued down into the darkness, and the smell of candles filled the air.“