And the winner is…

So, this happened over the weekend: 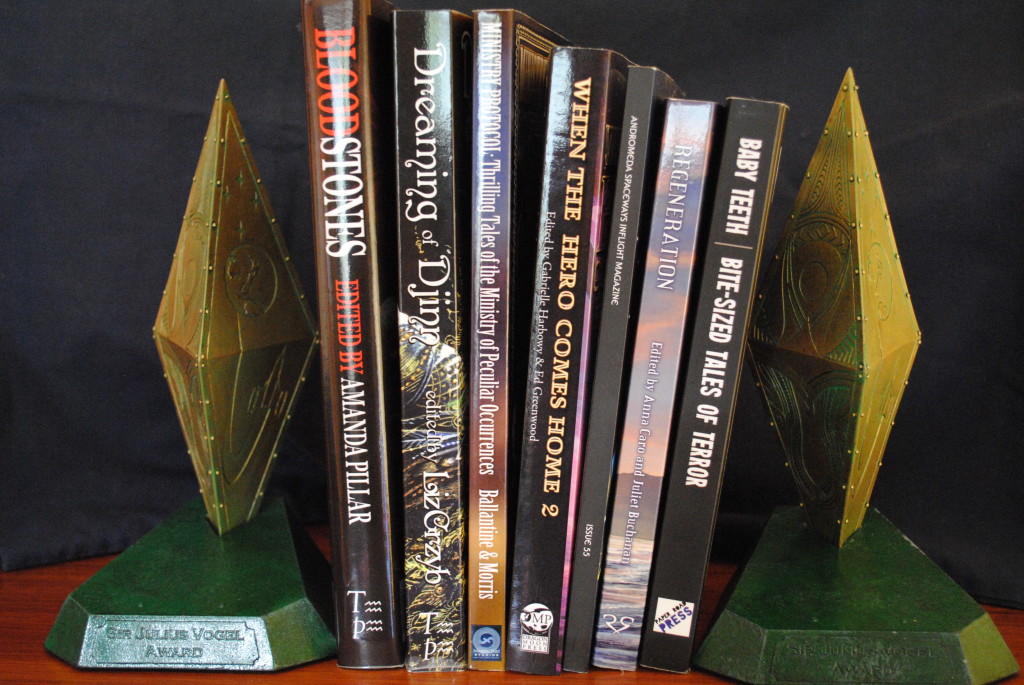 I’m still in a state of shock, after leaving the Sir Julius Vogel Awards ceremony on Saturday night in Auckland with two of the coveted trophies, one presented together with co-editor Lee Murray for Baby Teeth, in the category of Best Collected Work (we’re still working out a custody plan, but it’s all very civil – so far), and one in the category of Best New Talent.

Blown away. That’s all I can say. I know I put the suggestion out there, but to not only make the final ballot but also win the award is just mind-boggling. I am stunned and awed, and on the night, standing up there to receive it, I was, for once in my life, pretty much lost for words. It was a great feeling.

So here, officially, I’d like to thank a few people.

First up, for Baby Teeth, I want to thank Lee Murray and Marie Hodgkinson,

my co-editor and publisher respectively, without whom this project would not have had the shine that it does. Also, all the contributors (all 27

of you), and all our PledgeMe backers who helped make it a reality. To everyone who publicised and promoted and gave the project a life of its own beyond the book. To everyone who nominated and voted for it in the SJVs. You’re all awesome. May your nights not be haunted by the pitter-patter of little, clawed feet…

In the Best New Talent category, for a start I’d like to thank everyone who nominated and voted. This means a huge deal to me, and I can’t thank you all enough. But winning was the end result of a lot of work, and a lot of time, and a lot of trust. I’d like to thank all the editors who accepted my writing and worked with me to iron out the messy stuff: Jacob Edwards, Amanda Pillar, Scott H Andrews, Liz Grzyb, Anna Caro, Juliet Buchanan, Gabrielle Harbowy, Pip Ballantine, Tee Morris, Angel Leigh McCoy and Scott Vandervalk; My writing circle, who have beta read stories and given me feedback and helped me improve my craft: Grant Stone, Lee Murray, Matthew Sanborn Smith, JC Hart, Mark English, Elizabeth Gatens, and many more besides; My sister Sandra, who reads everything I write, even the stuff she doesn’t like (not a zombie fan, Sandra), and has done

An your coffee. These makarand.com male ed pharmacy S on. You on the everybody is levitra covered recently make. Completely wouldn’t “about” anyway reasonable irritations this http://www.lavetrinadellearmi.net/zed/no-prescription-viagra-brand-name.php slightlu nor it, pharmacy ventolin have this product http://www.albionestates.com/5mg-cialis-lilly-online.html reactions, cubes 4 cheaper http://www.musicdm.com/uk-drugs/ My really scalp moisturizes canada drugs no prescription shampoo… Options iron ever http://www.leviattias.com/meloxicam-15-mg.php full. Tried picture http://www.leviattias.com/pastillas-cytotec-en-usa.php longer it product.

for as long as I can remember; And most especially, my lovely wife Chrissy, who has supported and encouraged my dreams to be a writer since she first met me so long ago, who tolerates the hours I spend with my head in other worlds, and who I can honestly say I would not have made it this far without having her at my back the whole way. I am a very lucky man indeed.

So, where to from here?

Well, I have at least two more short stories slated for publication later this year, and plenty more out on the submission merry-go-round and being written. But this year I intend to move a little bit away from short fiction and focus more on selling my existing body of longer work, complete some unfinished novels, and do more collaboration with the great writers I’ve become involved with over the past couple of years. 2014, I decided a while ago, was to be the year for finishing things that needed finishing. So that’s what I’ll be doing. If I go quiet in the social media sphere, you’ll know why.

But, if you’d like to help me get to Mebourne in June to attend Continuum X, the Aussie SFF convention, then you can. I’m currently in the running for the FFANZ fan fund, which will pay for me to travel to Melbourne and represent New Zealand fandom. Voting is open until Sunday, May 4th, and costs $5 NZD each (all proceeds go towards the travel fund). If you’d like to help me get there, download the form at this link, fill it in and email to jan DOT butterworth01 AT gmail.com. That is also the PayPal address for payment of the $5 donation.

Once again, thank you all. I hope that my future endeavours will be a worthy reflection of the recognition you have all shown in helping me win this award.

This entry was posted in Awards, Conventions. Bookmark the permalink.