Twas a long while ago I first heard the phrase Unicorn Chaser.

At first I thought it a most obvious choice of phraseology, a Unicorn Chaser is one who chases unicorns, ergo, a Unicorn Hunter of sorts, and therefore a brave and daring huntsman worthy of the greatest praise and respect, as you will agree having so recently indulged in generous helpings of roast unicorn yourself.

Then it was expounded upon me that a Unicorn Chaser is in fact the application of visual things, heavily fashioned by unicorns and such nonsense as rainbows and fairy-dust, to ease an ill taste left in the mouth, or indeed in the mind’s eye, after being exposed to something unpleasant. A bright, cheery distraction from the ills of the world.

None of which makes any sense to me. Being presented with images of unicorns would simply make me hungry, and being hungry makes me upset, so how could that make me feel better?

Rather, I suggest we reclaim the phrase. A chaser is a drink, of sorts, and chasing is the act of pursuing, ergo, following, so I hereby decree that following the shared enjoyment of a lovely joint of spit-roast unicorn, that we all chase it down with a drink!

And what better opportunity, particularly for those of you who are less inclined to cook but more likely to tinkle a little rum over ice, to remind you that Omnium Gatherum, fine purveyor of literature dark and twisted, is offering you, dear reader, a free copy of a certain tome, recounting my latest adventures, entitled Sons of the Curse, for the mere act of recreating these recipes yourself, and somehow painting them in invisible fragments of light on this infernal window. To learn more, click your clicking thing on this scrawl of letters.

Unicorn Chaser: Blood in the Arena

Having crossed the howling voids that separate our worlds, I am most pleased to be joined by scholar and exalted alchemist of the drinkeous arts, Nicholas Diak for this very special bonus addition to the Wild Magical Banquet.

Nicholas has a wealth of experience in the arena, down there among the blood and the sand, the glory and the death, mainly mixing drinks for the victors as they swagger and stagger from the remains of their vanquished foes, adulated by the baying of the crowds.

Like a certain humble cook we all know, Nicholas has watched on from beneath the shade cloths as the mighty and the ignoble alike have had their moment in the sun, and he has quenched their thirst and they have raised their glass to him with a nod that says, Well done good sir; without you, I may not have had the strength to walk away. Without you, good sir behind the bar, victory may not have been mine this day.

In honour of the sacrifices and the carnage he has watched upon the sand, that glorious bedlam which has carved him into the gritty, unstoppable mixer of drinks he is today, Nicholas Diak has brought forth this ultimate homage to those bloody, heady battles, from which only the greatest shall emerge with their lives.

Blood in the Arena

In a shot glass, mix the Grenadine and the White Rum. Set aside.

Fill a Rocks glass with pebble or crushed Ice.

Bottoms Up! Wash away the last taste of unicorn from your lips, and make way for the final course: Dessert! 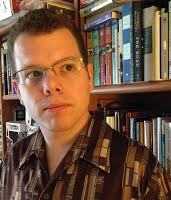 Nicholas Diak has been working hard these past few years trying to establish himself as a scholar of different fields of pop culture: Italian genre films (particularly the Italian Eurospy genre), post-industrial music, synthwave music and outrun culture, and H. P. Lovecraft studies. He has contributed essays, chapters and reviews to various academic anthology and pop culture websites. He’s also into a few other endeavors as well: tiki culture, cooking, cocktail making, pinup photo and art collecting, video games and retrogaming, comics and lots of movie watching.  Find out more about Nicholas at his home page. 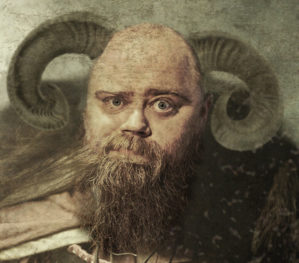 Akmenos, Son of Bane, is a serial killer of innocent cocktails, a devourer of the cutesy bits of fruit they hang on the sides of the glass, and has been known to wear those little paper umbrellas behind his ears when he thinks no-one is watching. You can verify the truth of these unlikely rumours by reading Brothers of the Knife, Book 1 in the Children of Bane Series, and Sons of the Curse, its sequel, and he recommends you do so before the ice melts and the fruit juice separates, just to be on the safe side.

It’s all about looking the part, right? Read below the line for an excerpt from Sons of the Curse, when Akmenos dresses up like a gladiator heading into the arena, so long as there’s room for his pepper grinder

Akmenos felt more ungainly than usual. He preferred his apron with all its pockets, the comforting weight of his knives on his hips. This was just uncomfortable. He’d never worn armour before. The straps chafed against his shoulders through the cambric undershirt. There was the sheer weight of the black leather, by no means as heavy as the suits the Warmasters wore, but certainly weightier than the pinny to which he was accustomed. The ridiculous swordbelt. He’d only ever held a sword a few times, ceremonial things and once during the compulsory day of close-combat training he’d had to endure during his warlock tutelage, which he’d failed miserably. The only advantage to the pesky belt was the number of sheaths he’d insisted they add to it, to fit his favourite knives: the paring knife, the carving blade, the cleaver. Then there was the shield. What in the pits was that all about? How did people march across deserts carrying all this palaver? How did soldiers not sweat to death before they even reached the battle with so much junk to carry?

“Er,” he started, as Surspine fussed around, measuring his head with a view to finding a suitably heroic helmet. “This all seems a bit extreme? I mean, I made it this far without any of this stuff. Won’t my carrying a sword just attract attention? Cause more trouble than it’s worth, sort of thing?”

The wyrmken muttered something indeterminate about the inconvenience of horns as regards the fitting of helmets.

“Because, you know, this gives the impression I’m some sort of daunting warrior type, when really I’m not, so that’s kind of misleading, right?” Not to mention that carrying all this extra weight, he’d be so exhausted by the time he arrived wherever he was going he wouldn’t even be able to lift the sword. But he liked the shield. It was round and metal and convex, and might hang nicely over a firepit with something strung through the straps, and he could use it to heat oil and fry meat and vegetables with a splash of sauce and spice. Beef Shield Fry, he could call it. Pioneering stuff. Presuming some other clever soldier hadn’t had the idea already, somewhere in the long, tiring dark of the marching lifestyle. Didn’t they have quartermasters and suchlike to do all the cooking for them? But mercenaries, bandits. There was a market.

“The impression of might sometimes matters more than the fact.” Surspine clattered through helmets with various gilded gaps forged into them to allow the egress of horns. Yet they all seemed somewhat too big, like they’d been crafted for something larger than hornung. Taur, maybe? Surspine selected one, smaller than the rest. “This may have to do,” it said, positioning the helm on Akmenos’ head. “It is a child’s plaything, for practice and playing at warriors, but it will have to do.”

Akmenos flinched. “A toy? You mean it won’t actually protect my head? Then what’s the point?” He grabbed the helmet off and turned it over. It seemed solid enough; he couldn’t flex it with his hands, at least.

The wyrmken shrugged. “Like I said, the fiction matters as much as the truth.”

“So I’m supposed to dress up and bluff my way into the Eternal Stair? What happens when they challenge me to a duel or something?”

The wyrmken gave Akmenos a dry, appraising look. “It was your suggestion to infiltrate the Eternal Stair. You had the option of working in the scullery for the rest of your days. My masters consider this an entertainment of sorts. A theatre. A parody, if you like. Fat little hornung whelp puts on a disguise and tries to dupe the Great Enemy into believing he’s one of them, only to be shredded skin from bone when they realise he’s not. It’ll be quite the show, and the Masters do enjoy a good show. They will appreciate your commitment to the performance.”

Stubbornly, Akmenos fastened the helmet’s strap, adjusted his belt. He couldn’t even ask for a map, since he’d said he knew how to reach the Eternal Stair. Too bad the inverse was true. While Hrodok seemed able to hunt him down, Akmenos hadn’t the foggiest idea where to start looking for him, or the Eternal Stair. He’d never heard of the murderous quasi-religious sect until a couple of days ago. However, he’d bluffed his way this far, and things did seem to have a habit of turning in his favour in unexpected if unpleasant ways.

“And this,” Surspine said. Having appraised his mannequin and found it, if not impressive, at least adequate, he handed Akmenos a leather pack. It was heavier than Akmenos would’ve liked, since it weighed more than nothing and he would’ve rather it weighed nothing at all. “Food, blankets, fish hooks, a lantern, rope, that sort of thing. Give you a sporting chance and all.”

Akmenos nodded, hoisting the pack. The weight of it sucked his strength away in great dry sloughs. But it was fine. Maybe he could bluff people, but not the wilderness. There was no fooling freezing or starvation.

“There you go, you’re all set,” the wyrmken said, though its frown suggested this was one warrior who would never be ready to face the world, and if this was as good as it was going to get, then never mind. It was a look that said to Akmenos, sometimes life throws failure at you, and you just have to suck it up, laugh it off, and move on.

The tiny cold knot in Akmenos’ belly, that pit of indignation at how everyone seemed to look down on him, flared into a bright spark of shame and defiance. Had he not crossed the Crystal Desert? Stepped through Rifts? Passed through the Abyssal Plane? Been swallowed by a volcano and lived? Maybe he really was more than anyone believed. He drew a breath, sucking in his belly and puffing out his chest. He might still be pear-shaped, but maybe he could be less pear-shaped if he tried really hard. He could at least be apple-shaped. His brothers were warriors. Warrioring was in his blood.

A chill realisation ran through him. Why was he the kitchen underling? When his brothers had become warriors, warlocks, and commanders? Hadn’t he always shared their potential? But he’d been banished to the kitchens, destined for soufflés and carpaccio and those little prunes wrapped in smoky bacon. While his brothers fought wars and built empires, he licked out pudding bowls, and sometimes dreamed of better things, but lived with the constant knowledge that cooking was all he would ever be good at.

Sons of the Curse, Chapter 6, Book 2 of the Children of Bane series by Dan Rabarts (Omnium Gatherum, 2019)

This entry was posted in Books, Guests and tagged Akmenos, Brothers of the Knife, Children of Bane, comedy, Cooking, fantasy, grimdark, Recipe, Sons of the Curse, steampunk. Bookmark the permalink.