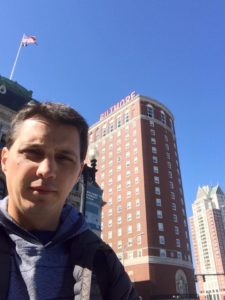 Arriving at the Biltmore

I know it’s a bit late, because life, but at last here it is, my report on StokerCon 2018, in Providence, Rhode Island, USA.

Sometime in the middle of 2017, I was nudged and prodded and cajoled by my ever-supportive and ever-hardworking collaborator, Lee Murray, to seriously consider investing in the trek to StokerCon, the annual convention of the Horror Writers Association, to meet and greet with those whom she described as “our tribe”. Specifically other writers of horror, dark fiction and gritty action, predominantly living and working in the USA, for whom the trip might be a question of whether to drive or take a domestic flight. For us, coming from New Zealand, the prospect involves multiple flights, including the 12-hour Pacific leg, time off work to transit, time away from the family, and a raft of other excuses that make it easy to justify deciding against committing to such extravagance. StokerCon had been held in LA in 2017, and Las Vegas the year before that, both a lot closer than this year, when it was held about as far back east as you can get before falling off America altogether: Providence, Rhode Island. Stomping ground of Cthulhu mythos creator H.P. Lovecraft.

I couldn’t afford all these things, I told Lee. The flights, the accommodation, the time off, the airport food. But Dan, she says, you can’t afford not to. There are people who need to meet you. So I did what I often do in these situations, when it seems the problems I face are too big to overcome: I changed my mindset. I decided I was going, and I would make the challenges go away in order to achieve the desired goal. Each challenge simply a part of the project to manage in order to hit the deliverable. Which reminded me that the day job fills far too much of my headspace, which is part of the reason I need to make it to things like StokerCon.

I applied for a travel grant, from a fund administered by the Publishers Association of New Zealand together with New Zealand’s arts funding body, Creative New Zealand, expecting that as a fringe author writing at the dark end of the speculative spectrum it wouldn’t be likely to cut the mustard. But, in a surprise twist, CNZ/PANZ approved the application and provided some funds towards my travel costs, which made life that much easier. Absolutely brilliant to see our professional and creative bodies taking an interest and supporting dark fiction in this country. Huge thanks to both for helping make this trip happen.

0Anyway, long story short, planning done, the day arrives when I board a plane for the first of four flights to Providence, RI. After what was a thankfully uneventful 34-hour trip I arrived in Providence, only to find out that the AirBNB accommodation I had arranged for the duration of my stay had cancelled but not bothered to tell me. Panic stations set to Mild. Within an hour I had found an alternative, which turned out to be closer to town and a much better option in the end. So that worked out for the best. Panic stations set back to Standby, I bussed from the airport into the city and arrived at the iconic Biltmore Hotel. 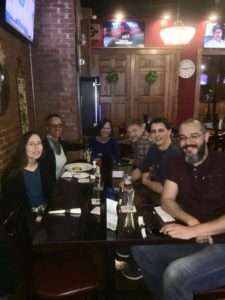 Dinner with RDSP, Linda Addison, and the Murrays

Meeting up with Lee and husband Dave, who had also arrived the previous day, we set out to familiarise ourselves with the surrounds, take some tourist snaps, eat the local food and drink the local beer, buy presents for the kids, and strategise how between us we would try to cover the whole convention. A heady task, given the oodles of panels, workshops, readings, presentations and discussions that would take place over the course of the four days of the convention. We were never going to do it, but we’d give it a damn good shot.

That evening was the first in what would be a series of highlights, namely meeting up with Jennifer Barnes and John Edward Lawson, our publishers at Raw Dog Screaming Press who picked up Hounds of the Underworld and the forthcoming second book in the Path of Ra series, Teeth of the Wolf. Lovely people and great conversations had over dinner. Also met the lovely Linda Addison, poet extraordinaire and recipient of this year’s Lifetime Achievement Award from the HWA.

Later on, we walked through the frosty winter night to the train station to meet Alan Baxter, fellow author of dark fiction who had made his way to join us from Sydney, Australia, bumping the Antipodean numbers up from two to three. Together, we had now tripled the number of Kiwis and Aussies to have attended any StokerCon in the past. 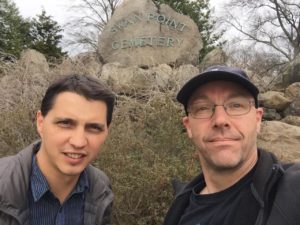 The next day, the con was underway. We slipped in a little more sightseeing while the weather held, including a tour of the Capitol Building and a pilgrimage to the family plot where H.P. Lovecraft is buried, and there we left a penny for Cthulhu on Howard’s grave. Turns out we timed it well because the weather was closing in, a brutal storm was on its way and by the following day the cemetery would be closed due to fallen trees. Back at the Biltmore, people were flooding in, introductions were being made, hands were being shaken and smiles were lighting up in recognition.

Putting so many faces to names, and names to faces, and connecting in the flesh with people who mostly, for me, had been Facebook profiles or whose writing I’d enjoyed. It would be the start of what would largely define StokerCon for me, that clicking together of pieces. “Oh, that’s you!” 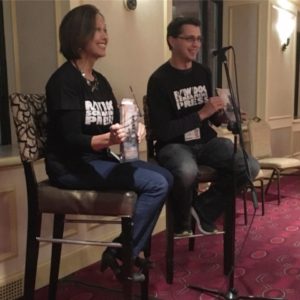 Reading from Hounds of the Underworld with Lee Murray

Lee and I had a reading that evening, in which we worked through a couple of chapters of Hounds of the Underworld to a small but rapt audience, those who had not packed out the Jack Ketchum Memorial. Tough act to be up against but let me tell you, we did one hell of a top-notch reading.

Grabbed a taxi back to my AirBNB somewhere well after midnight, jetlag working in my favour for the late nights. Driver recognises my accent, wants to know if I’m from Auckland. No, Wellington, and we chat about New Zealand and horror writing on the cold drive home.

That afternoon, I hosted a panel titled Beyond the Borders – Writing Outside the USA, on which I had the pleasure of moderating none other than British horror legend Ramsey Campbell, down under compatriots Alan Baxter and Lee Murray, and Chris Marrs from Canada. Great to hear the different perspectives on how we as outsiders to the US market break into it. Do we imitate and try to sneak in? Or do we write our own worlds, and write them truthfully and with conviction, and stand out from the crowd? How do we tread that thin line between the familiar and the inaccessible? 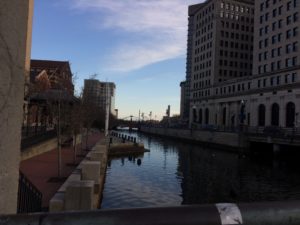 I was also a panelist on a discussion about growing one’s readership, and in that I managed to get in mentions of other NZ writers and many of my favourite authors from the podcasting scene, as well as dropping a little promo for Te Kōrero Ahi Kā, the recently-released anthology of NZ speculative fiction which happens to include quite a bit of dark fiction too. Meanwhile, outside the storm was raging, water was spilling in the front door and through the ceiling of the hotel bar, as it cranked itself up to a howl. The restaurant was swamped with guests as no-one wanted to dare venturing out for a meal. There was lots of talk deep into the night as the wind and snow snarled about the rain-slick streets, the beer cold and the conversations fascinating.

After schmoozing about in the post-film festival festivities, it’s once again after midnight and I’m hopping in a taxi for the five-minute drive up the hill. Driver recognises my accent. Says, “Hey, my brother drove you home last night!” Loves the All Blacks, he tells me. Loves that thing they do before a game, what’s it called? So here I find myself, in a taxi in Providence, Rhode Island in the middle of the night, doing a haka for the driver as best I can while sitting in the back seat. Things I never thought I’d be doing, but there you have it.

The next day was Saturday, and it started early with a meeting with Jennifer from Raw Dog, at which we pitched and got the go-ahead on the third book in the Path of Ra series. Other opportunities were also discussed over coffee and breakfast, but of those I shall speak nothing further. Very secret squirrel. And we’re into more panels, more networking, more soaking up all the positive energy and good information. Another highlight was meeting Angel Leigh McCoy, who was the first editor to ever accept a story of mine for publication, and to be able to thank her for being a critical gear in the machine that set me down this path. I sat on another panel, about Crossing Genres, and managed to sneak in more mentions of NZ and Aussie authors I really like, and before I even knew it the day had turned to night and dinner was being eaten at the bar and the time had come for the Bram Stoker Awards. 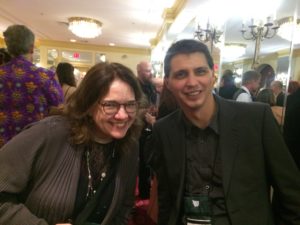 Jeff Strand was the star of the hour, em-ceeing his tenth and final Bram Stoker Awards ceremony, and it was great to see the community turning out to celebrate and support the achievements of others. This was followed by the photos (I managed to get myself in a few helping carry Greg Chapman’s award for services out of the banquet hall, on account of coming from vaguely that part of the world), and then the drinking and the milling and the talking and the… Well, you know how that bit goes. Late in the night, yet again, stories being told, quiet deals being made. This is the part of the con when the real work gets done, after hours and over the rims of beer bottles and whiskey glasses. Another night when my taxi ride up the hill was somewhere well after midnight.

Sunday, things moved a bit slower, as the con starts to wind up. The goodbyes, the final handshakes, the acquisition of books as people try to lighten their homeward luggage, the late leavers who hang out and cruise the local bookstores and have a last dinner together. The rush to scribble down notes and remember everything that’s happened, plan all the things that must be done going forward. 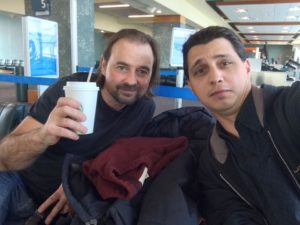 And then the homeward leg. Airports. Eating a Johnny Rocket burger while chatting with UK writer Danny Rhodes in Providence Airport. Philadelphia, LA, and the black glass of the Pacific cast in shadow beneath the wings. Home.

Then, somehow, I lost about four months, between writing these notes and getting around to putting them up here for everyone to read. To be honest, I’ve had a lot to get done, mostly off the back of StokerCon. Two book deals signed, and consequently deadlines to hit. Things to plan, things to complete, things to deliver. Life and work and family filling all the spaces in between the writing. Decisions to be made, including: StokerCon, Grand Rapids, Michigan, May 2019. Will I make it? Will I be there? Will you?

This entry was posted in Conventions. Bookmark the permalink.