It’s been a while since I posted last, because I’ve had so much 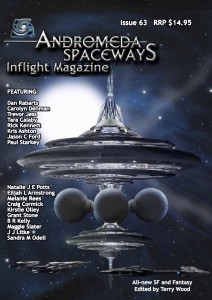 My SF horror novella Spindle has appeared in Andromeda Spaceways Inflight Magazine Issue #63, and the story is the inspiration for the amazing cover art. It’s the first time I’ve had cover art for a whole magazine, so that’s a bit of a milestone. Spindle is a story about how when things go wrong in deep space, they go really, really wrong.

The final ballot for the Sir Julius Vogel Awards has been announced, and Floodgate has made the list for Best Short Story. If you’re an eligible voter, you should get a copy of the story in the Voters Pack from SFFANZ very shortly. If you’re not already, you can vote in the SJVs by either joining SFFANZ, or by attending Au Contraire 3 or becoming a supporting member of the convention.

At The Edge is in the middle of its Kickstarter campaign, and is already funded. We’re still pushing for some stretch goals, including a huge ebook bundle from Cohesion Press, but this book is being published. So excited, so many good stories, from new voices and established legends in the field.

If we hit $2000 on the Kickstarter, every backer will receive a bundle of ebooks from Cohesion Press, including the SNAFU series of military horror anthologies. 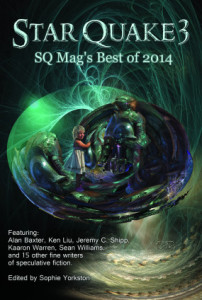 My short story Keeping an Open Mind, which won third place in 2014’s SQ Mag short story competition, has been reprinted in StarQuake 3, SQ Mag’s Best of 2014, along with names like Alan Baxter and Ken Liu. Nice to be in such good company, and with such good cover art.

I’ve also been flat out helping get Au Contraire 3, this year’s SFF NatCon going, planning the writers’ stream of panels together usual suspect Lee Murray, and also prejudging the 2016 Science Fiction and Fantasy Short Story Award, also with Lee. We’ve passed on our finalists to judge Phil Mann, and the results will be out soon.

So, plenty going on to keep me busy. Looking forward to seeing some of you at Au Contraire in June!