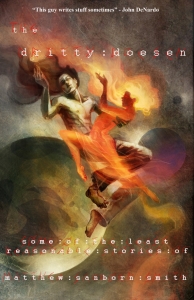 Cerberus co-writer and fellow creator of the weird, the macabre, and the fantastic, Matthew Sanborn Smith, has some big news about a short story collection he wants to let you know about, and as an added bonus, he’s letting me share one of those stories here today. You can find the collection at Amazon, right now. Take it away, Matt!

Thanks, Dan, for letting me hang out here today. The Dritty Doesen is my first collection, and it’s packed high with my least reasonable stories, as you’re about to discover with this sample story. The collection contains this and eleven more stories with behind the scenes looks at how each of them came into being. I’m even throwing in a stunning cover by the talented Galen Dara! Enjoy!

When Martin’s head began to split he suspected a problem. In his blastroom he first noticed the sudden middle part in his hair and wondered if his mirror software had gone buggy. Then he felt a little furrow going down the center of his scalp. He couldn’t recall anything special earlier, like a sudden axe to the head. Then again, it was the nature of such a trauma that he might forget it.

“Hugh?” he asked, for that was what he called his house, “Did I get hit in the head with an axe or something today?”

“Not that I know of,” Hugh said. “Although you were out for a couple of hours. I don’t trust my remotes with my money.”

“Hmm,” Martin said. “Hmm. Hmm. Hmm.” He’d been for lunch with his fresh new sister/self, Martina. But a lunchtime axe to the head would have been fully healed by now.

“Speaking of money,” he asked Hugh, “Any activity on my account today to, say, emergency medical nodes?”

“Gimme a sec. Nothing beyond the normal litany of mental problems.”

“All right. It’s probably nothing. I imagine it’ll be gone in the morning.” With a nod from Martin, Hugh blasted his body clean of debris to the molecular level. Martin’s teeth brushed each other and he crawled into the massive vagina at the end of the hall. He attached the floppy nozzle to his umbilicus, curled up in the enormous genetic replica of his mother’s womb and drifted securely off to sleep.

He’d forgotten all about it the next morning, recapping the latest installments of his serial dreams. His humiliation at being naked in public was totally tamped by that pop-up promo for his upcoming Dadaist dream. He’d have to pay his super-ego corporation to lose the ad, but the shame would be worth it.

Everything looked out of joint this morning. Might have been the Dada leaking into his consciousness. Martin squeezed the sides of his umbilical nozzle and it popped out, draining it’s Wharton’s nut butter on the floor. On his way out, his head jerked back, caught on the wall of his mother’s cervix.

“What the hell?” He felt up there and discovered something like . . . like antlers springing from his head. He ducked and looked up, saw the bleeding tear in the flesh. “Sorry, Ma,” he said, though no one but Hugh and his twenty-seven life-followers heard him. “A little ‘Gina Spackle will fix that right up,” he assured her. He tried to cover his antlers with his arms and backed out slowly.

Martin went directly to the blastroom. “Oh, jeez,” he said, as his mirror coalesced. Not only did he have antlers but the split in his hairline had become a split in his head. He was cleaved down to the bridges of his nose. No wonder things looked so strange. His eyes strayed far enough from each other that his stereoscopic vision was just plain scopic.

“Do I look strange to you?”

“Now that you mention it.”

“What’s going on here? Did I pick up some kind of sensually transmitted disease from Martina?”

“Let me see. Chin up.” While Hugh checked, Martin touched his tips. A ten-pointer, not far enough along to feel proud, but he should probably make time to find a mate.

“Hmm,” Hugh finally said. “Seems your mind is at war with itself. That explains the graphic metaphor of your cloven head.”

“What about the antlers?”

“They’re bone. On the outside. On the inside they’re brain.”

“Brain? That’s a bloody inefficient way to run a brain.”

“I haven’t the slightest. Stop struggling with yourself?”

“What am I struggling with myself about?”

“‘What aren’t you?’ is the better question.”

Martin wandered out of the blastroom with outstretched hands guiding him. He wanted some cedar juice but stopped short on the edge of his living room.

“Hugh? Are you of two minds about anything?”

“Have you looked in your living room?”

The cedar juice would have to wait. The living room ceiling seemed to be dripping down to the floor. A thousand stalactites hung from above, nearly stabbing the carpet. They formed a white forest preventing any human passage to the kitchen.

“How do you explain that?” Martin asked.

Martin ran his hand down one stalactite. It was firm and dry. Part plastery, someone in his mind told him, and part latexy, though he’d never before encountered either of those materials.

“Are there any brains in there?” he asked. “Like my antlers?”

“Can I break these things off?”

“Apply some pressure and we’ll both know.”

Martin applied. The piece in his hand broke off and fell to the floor. Just a little powdery. Seemed harmless. He cracked and snapped a path through. Thankfully, the kitchen seemed normal.

“I think that was brain after all.”

“Don’t cry over spilt brains, Hugh. The important thing is I got to the kitchen.”

To hell with the juice, now. Martin poured three fingers of rubbing alcohol and splashed it against the back of his throat, then stuck a hand between his head. His nostrils snot-whistled their bye-byes to one another.

“What do you guys think I should do?” he asked his followers. He turned the comment spigot ever so slightly and quickly turned it off again. He received the following:

_I found this very helpful for my homework assignment. more like this._

“Do you have any real people following you?” Hugh asked.

“God, I hope not. That reminds me, though, I could ask the lawn for a solution. That’s my last best hope before I have to start talking to real people.”

“Let’s hope it doesn’t come to that,” Hugh said.

He checked the progress up above. His antlers curved in toward each other. He dreamed of achieving something of a wicker basket on his head. He could wedge a couple of baguettes in there and offer them at dinner parties.

Martin opened the door to the backyard and his sunlids squished his eyes down against the blinding light. He called for a quick vote on the civics fields to push the sun back to only being up five hours a day. Those jerks in the Soviet Sequel always spiked Sol back in the West’s non-collective faces. They didn’t want all that daylight either. But consensus was building. Maybe next week.

Tawny Dowzer, anchor of the Action Ten NewsMovies stood there on his lawn, her face pressed into a sunflower. She looked up at his exclamation.

“Holy Jesus!” she shouted and backed away from him slowly.

No, wait! was what he tried to say, but it didn’t come out like anything comprehensible because his palate was as completely cleft as everything above it. Tawny ran off screaming. His tongue, seated firmly inside his mouth, tasted the acerbic burn of raindrops from above. Soon it and his jaw would be cleft as well.

Goddamned lawn! He’d told it to attract Tawny weeks ago and it chose today to grow that sunflower? He kicked the turf and yelled something that even it didn’t understand. Long blades of unkempt grass wrapped around his angry foot and pulled the rest of him down. It grabbed hold of his antlers and shook until he couldn’t think straight. Martin’s struggle to stand up exhausted him. He was able to roll onto his back. The raindrops stained him deep blue.

The too-bright sun burned the sky. What rained down on him was the color melting from on high before the rushing heat. Where the flames passed they left black cinder curling to ash. The Earth’s horizon climbed up to the heavens, for if there was no more sky to fill the sky, the land would have to take its place. What else was there?

And here I thought it was me!

If you liked that, check out the whole collection.

This entry was posted in Books, Guests, Short Fiction. Bookmark the permalink.