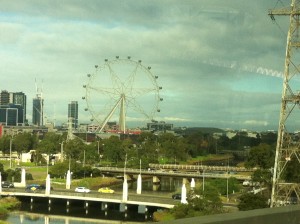 So much awesome, so few words.

Attending Continuum X as the FFANZ delegate has to be one of the most amazing things I’ve done as a writer to date. I met so many great people, many of them folk I have known online for quite a while, but also many whom I met for the first time once I arrived in Melbourne.

I had absolutely NO time for sightseeing. Every day was chock-full of stuff happening, from panels and talks I wanted to sit in on, to those I was a panelist on, to talking and drinking coffee and chattting and just being caught up in the moment, and everything that was going on. I met many of my Australian writer friends, and tried my best to maintain both my dignity as a writer and indulge my squee factor as a fanboy.

Melbourne was a most accommodating place to stay, and I must thank most profusely, over and over again, my friends Rachael and Eric who let me stumble into their house in the dark every night and collapse into their spare bed, only to be gone again straight after breakfast, and who then even drove me to the airport on the day I left. Thanks, guys. Much appreciated.

The highlight of the convention, for me at least, had to be Ambelin Kwaymullina’s Guest of Honour speech, which brought into very sharp focus the role of writers, particularly speculative fiction writers, to take up the responsibility of tackling diversity and respecting the voices of the under-represented in genre fiction. I have been hoping to see her speech crop up online, it was that good, but I haven’t seen it yet. However, she did post an article over at the Wheeler Centre last week, which is along similar lines and worth a read. 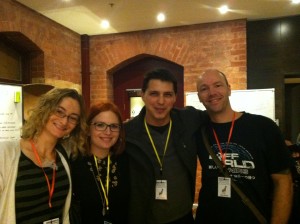 Other particularly high points were getting a selfie with Alan Baxter, Joanne Anderton and Amanda Pillar, sitting in on a Kafeeklatsch with Jim C. Hines and a bunch of most excellent Aussie fans, sharing dinner and a beer with IFWG publisher Gerry Huntman and Cohesion Press’s Geoff Brown, and then the following night doing the same with Tehani Wessely, Tansy Rayner-Roberts, Elanor Matton-Johnson and others, and then attending the Ditmar Awards and presenting the award for Best Fan Writing to Sean Wright. But really, it was all good. Better than good. It was great.

So I must pass on a huge thanks both to the FFANZ people who made my trip happen, and also to the ConX committee, who were so welcoming and made my stay such a good time.

I will be producing a trip report as part of the fundraising efforts for upcoming FFANZ delegates, so keep an eye out for that. Also, as I’m now administering the New Zealand half of the FFANZ fund, I’ll be involved in organising the next two exchanges. In 2015, an Australian will be coming to New Zealand for our Natcon, which will be Reconnaissance in Rotorua over Easter Weekend, and then a New Zealander travelling to the Australian Natcon in 2016, wherever that might be. For more information about that, please head over to Facebook and drop a Like on the FFANZ page. If you’re interested in being considered for either of those trips, then send us a message there.

This entry was posted in Conventions. Bookmark the permalink.