Arrivals, and the Numbers Game 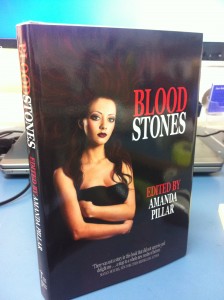 Sometimes the trouble with living at the bottom of the world is that things can take a long time to get here. I’ll blame bushfires, and floods, and the secret zombie apocalypse, but at last I have a couple of copies of Bloodstones, the urban horror anthology which includes my story, The Bone Plate.

I’m pretty excited about this, as you can imagine, what with it being my first story published in a print anthology.

You can read the first page of this story by, well, zooming in the picture of that first page. Just here. If you want more, you can pick up a copy of the whole anthology from indiebooksonline.com. 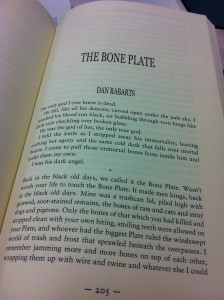 As I look back, I’m quite pleased to say that I saw my first two stories published in print last year, and so far for 2013 I have six stories slated for publication, variously in print or electronic formats, all for at least some small amount of money, which I consider to be a pretty good start to the year. I’m hoping there will be more to this, even though I’ve had a good run of rejection letters since Christmas too.

Genre? I don’t think so. I’ve sold Horror, Hard(ish) SF, Psychological SF, Steampunk, Weird West, and Dark Fantasy in equal measures (I’ve always intended to keep my genres diverse, so I can play across the field).

Style? Subject matter? Political or social commentary? Once again, for all these things, I try to keep my writing diverse, so I can’t really attribute any of these things to the wide range of different markets I’ve got stories into.

Now there’s something I can add up. And the numbers are very interesting.

Of the nine stories I’ve received sales contracts for since I started submitting almost two years ago, six of those stories were written pen on paper before they migrated to the computer for editing and submitting. The other three were first drafted on a keyboard.

What’s even more interesting, however, is the strike rate. I currently have five stories which I have been submitting (at least once, to professional or semi-pro venues) which have not been accepted. All five of those stories were first drafted on a PC. None of the stories I first wrote by hand which I have submitted are still in this limbo. Every one of them has sold.

(I also have one story which I wrote using Google Drive on my phone, the ipad and my PC, which is currently awaiting a reply after a rewrite request, so I’m not counting that one. It was an interesting experiment in utilising digital tools, and if it sells to the first venue I sent it to, then that will also a statistic worth weighing up. But at the moment, I’m not counting it at all.)

So I think I can take something away from this, and that is that, for whatever reason, whether it’s because I get tired of looking at the screen, or there are too many distractions (like Facebook, and Twitter, and blogging, and RESEARCH!), or because I get caught up worrying about format and word counts and self-editing instead of just getting words on the page, I simply write better with a pen and paper in a quiet part of the house. And I currently have at least a half-dozen stories sitting on paper that need to be finished and make their way onto the computer. Looking at the numbers, I’d say that if I’m going to get more stories sold this year, then those are the ones I should be paying attention to.

So if you see me around here a bit less, you’ll know why. I can’t argue with those sorts of statistics.